APGA IS THE ADDRESS OF NDIGBO – GOVERNOR SOLUDO 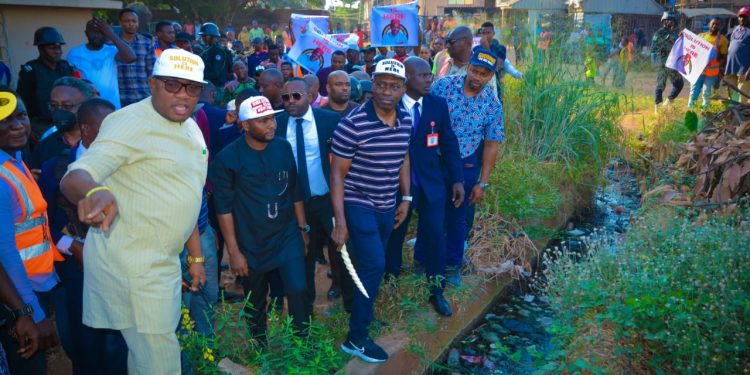 Anambra State Governor, Prof Chukwuma Charles Soludo CFR while on an inspection tour at Ichie Road, J.N.Madubo Road, Ezinwa Square, Agulu-Awka in Awka South have called on the people to keep supporting APGA which is the best platform for Ndigbo.

Saluting residents of Umuogbu, Soludo disclosed he had earlier seen the condition of the road on video before deciding to physically assess it.

Lamenting the deplorable state of the road, Soludo informed the people that any road the Government is building must be inspected by him, so as to feel what the people are feeling.

Displaying his love for Awka metropolis, Soludo bemoaned the condition of Umuogbu road is not befitting for a state capital.

Mr Governor noted that Umuogbu road will be redesigned before construction is carried out, assuring them by the next rainy season, April/May 2023, the road will wear a new look.

He maintained that while a state of emergency have been declared on all roads in the state, over 226KM of roads have already been awarded for construction.

Soludo told the people that Solution is here to take away the pains they have been passing through for years, despite the fact that he has only being in office for 8 months.

He concluded by informing them that he shall come visiting again during Campaign in the next two to three months.